skip to main | skip to sidebar

TRADER JOE'S IS RACKING UP POINTS WITH CYCLIST'S 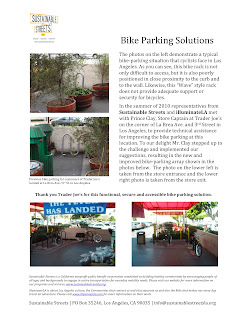 The story is simple, ask a cyclist about the bike parking at retail destinations in LA and you'll likely get an earful about lack of accommodation to park safely and securely. Grocery stores in particular offer some of the worst bike parking options, forcing many would be cycling customer's back into their cars simply to avoid the numerous hassles and more importantly, to avoid the risk of theft due to insecure parking schemes.

On the bright side, a new leader is emerging in Trader Joe's. The recent addition of bike parking at its Hollywood & Vine location has received favorable reviews by the cycling community, albeit after a social media boycott started by illuminateLA. Following the Hollywood & Vine victory, representatives of Sustainable Streets and illuminateLA sought improvements at the Trader Joe's on the corner of La Brea & 3rd Street (click on image for before and after views). To be fair, cyclist's have been asking for better bike parking at this location for many years, myself included; however in this instance the ask transformed into real action. I also give credit to the fact that we were about to shoot video of the dismal parking conditions when Prince Clay, Store Captain, came out to see what we were up to. We explained that the bike parking conditions were unacceptable and simply wanted to document the lack of consideration given to customer's who arrive by bike compared to customer's who arrive with a car.

Mr. Clay handled the situation with grace and tact, requesting that we work together to solve the problem. After hearing our complaints and suggestions, he not only committed to solving the problem, he delivered on his promise (see image above). Thank you Prince!

Although these victories may seem insignificant to the casual observer, cyclists' depend on a safe, secure, accessible and comfortable place to store a bicycle while shopping. In my view, this is an easy and cost effective way for merchants to win loyalty from customers who cycle. My hope is this trend will continue and more stores will see the value of accommodating bicycles in their parking schemes. Do you know a store that needs a little motivation? Leave a comment.