skip to main | skip to sidebar

Are Mood Rings the Answer to Calming Cyclists' Fears in Culver City?

On Saturday, January 30, 2010, Culver City hosted another workshop to invite comments and inform the public on the progress of the Bicycle Pedestrian Master Plan (BPMP) initiative. The workshop portion began with Alta Planning dividing the group and leading the usual foreplay of inviting comments on prepared citywide maps. After this exercise the congregation regrouped to hear a report from the consulting engineer on the project related to Bike Access Between East Culver City/Expo Area and Downtown Culver City. This is when the meeting raised some alarm bells with the public. During this discussion there was a recurring outcry to transform Washington Blvd. as the primary access road for cyclists to get downtown from the soon to come Expo Station at National and Washington Blvds.

Unfortunately the consulting engineer and the city don't see the same reality as the people who give their time to attend a meeting on a Saturday. The city contends that Washington is a gateway road for motor vehicle traffic and changing it would result in diverting motor vehicles onto alternate roads and thereby creating even bigger problems elsewhere in the network. Let me get this straight, the city is preparing a BPMP with money from LA County Public Health, but it won't entertain options that might motivate motorists to consider healthy alternative modes such as cycling and walking. Ding! The alarm goes off in my head and it becomes clear that the city doesn't yet envision or fully embrace transportation solutions that will reduce the number of automobiles on our streets and improve the health of all citizens.

Currently Washington is an arterial with a volume of 25,000 ADT (Average Daily Traffic). One proposed counter measure from the audience was to consider a Road Diet (RD) as an effective tool for accommodating bicyclists along this now motor vehicle laden arterial. At this point city officials stepped in and state that RDs are used on roadways with 20,000 ADT and under.

True, but not exclusively.

In a report entitled Road Diets Fixing the Big Roads by Dan Burden and Peter Lagerwey, a number of examples are highlighted where RDs proved effective with ADTs above 20,000. So, while most of the time RDs are implemented with an upper threshold of 20,000 ADT, it is not unheard of to utilize this counter measure on streets with much higher traffic volumes. In fact, on page 3 the report notes that "roads with 19 - 25,000 ADT qualify for a diet" and again on page 4 it states, "The upper comfort range for arterial conversions appears to be between 20 - 25,000 ADT." Additionally, page 6 illustrates that Kirkland, Washington had the nerve to search for an upper limit back in 1995 by converting a road with 30,000 ADT, "the roadway never crashed."

The actual treatment is fairly inexpensive compared to more elaborate counter measures. The road is re-striped from four lanes to three, and in some cases six lanes down to five, with a shared center lane for left turns. The remainder of the space is used to accommodate bike lanes to achieve a more welcoming and inclusive street without reducing the overall traffic volumes. And, if the city actually counts the peds and bikes as viable traffic, the street would likely show an increased ADT after a RD is completed.

I understand that a bike plan should be open to all options and RDs are not a magic bullet for arterial roads. However, what has me fired up is the consulting engineer for the project doesn't offer anything other than, "The City has a plenty of bike access to downtown from the Expo Station, but its up to you to choose the proper route based on your level of fear." Case and point, his presentation kicked off by polling the audience on their level of fear when riding on "Big Roads" versus local residential streets. The polling exercise was nothing more than a clever tactic to justify the predetermined conclusion that Washington and Jefferson Blvds. aren't going to change much when it comes to accommodating bicyclists.

The engineering analysis then offered a map, see below, with color coded streets to illustrate various access points to downtown from East Culver City. Now I'm wondering how citizens and visitors might use this map since the streets will likely be the same as they are now with minimal improvements. Perhaps the city will issue mood rings to all citizens as a way for people to identify their level of fear and thereby take responsibility for choosing the appropriate route. Using the map below as a reference, if your mood ring is red you're in a fiery mood and can take on Jefferson Blvd., by contrast if your ring is green you are in the mood for a calmer street and should take the Wesley/Lucerne route, when you're in a yellow mood take Washington and so on. Of course this plan will require colored way finding markers so people can choose the correct mood route and easily adjust their course if mood swings occur along the way. Brilliant! Why didn't we do this sooner. 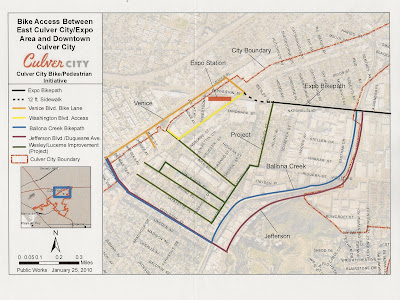 Seriously, I wonder how much of the grant funding was spent on this analysis when It could have been done for free by a group of middle schoolers? The overall message is that while cyclists do have a right to use every street, don't expect the city to make it more inviting for cyclists on the arterial roads. I find the entire approach absolutely uninspired and lacking vision.

In fact, this approach is very similar to what Los Angeles is attempting to do with its bike plan. LA wants to herd cyclist's to side streets and do as little as possible to change the "Big Roads" to accommodate cyclists. Is this also the plan for Culver City?

The problem is that the "Big Roads" have the commercial destinations that cyclists want and need to access without FEAR. If people are afraid to ride a bike on the streets, it indicates a problem with the street design not with the people who want to ride a bike as a transportation solution, a funding solution, an environmental solution, a public health solution and a community building solution.

The one nugget of hope I left with on Saturday came when Charles Herbertson, Culver City Director of Public Works, stepped up and said that improving bike access on Washington Blvd. has been a recurring comment at public meetings. As such, they will make sure to examine potential improvements and look for funding opportunities after the plan is adopted. Great your listening, but what about Jefferson, Culver, Overland, National and Sawtelle boulevards? These Big Roads are just as important to cyclists. Culver City has an opportunity to create a connected Backbone Bikeway Network similar to what bike advocates are proposing in Los Angeles.

My FEAR is that even with a BPMP in place we'll get more of the same on our streets where cars are treated like kings and humans are accommodated only when space permits. We need people to attend these meetings, please go to ccwalkbike.org and get on the mailing list to be notified when public meetings are scheduled. Let your voice be heard.
Posted by Ron Durgin: at 1:45 PM

Email ThisBlogThis!Share to TwitterShare to FacebookShare to Pinterest
Labels: activism